The Center for Political Philosophy in Leiden is pleased to announce our annual lecture (in cooperation with the Centre for the Study of Political Parties and Representation) by Philippe van Parijs (Louvain la Neuve): ‘Just Europe and Fair Brexit’.

Phillippe van Parijs’ talk will begin with a number of interpretations of what a “fair Brexit” may mean, in terms of UK-European economic distribution: sheer symmetry, "pacta sunt servanda”, “qui casse paye”, “just Europe”, etc. He will then connect this discussion with the debate on whether economic justice in Europe should be conceived as cooperative justice between member states or as distributive justice between citizens. He will also reflect on the implications of Rawls’s seminal argument in The Law of Peoples for the European Union.

Van Parijs is professor at the Faculty of Economic, Social and Political Sciences of the Université catholique de Louvain (UCL), where he directs the Hoover Chair of Economic and Social Ethics since its creation in 1991. He was a Visiting Professor at Harvard University’s Department of Philosophy from 2004 to 2011, and has been a Visiting Professor at the Higher Institute of Philosophy of the Katholieke Universiteit Leuven since 2006, and a Senior Research Fellow at Nuffield College, Oxford, since 2011.

Van Parijs is one of the founders of the Basic Income European Network (BIEN), which became in 2004 the Basic Income Earth Network, and he chairs its International Board. He coordinates the Ethical Forum of the University Foundation. He also coordinates the Pavia Group with Kris Deschouwer and, with Paul De Grauwe, the Re-Bel initiative. He is a member of Belgium’s Royal Academy of Sciences, Letters and Fine Arts, of the International Institute of Philosophy, and of the European Academy of Sciences and Arts and Fellow of the British Academy. In 2001, he was awarded the Francqui Prize, Belgium’s most generous scientific prize.

Attendance of the Annual Lecture is free and there is no need to register. See the website of the Centre for Political Philosophy for more information. For further questions please contact dr. Dorota Mokrosinska at d.m.mokrosinska@phil.leidenuniv.nl 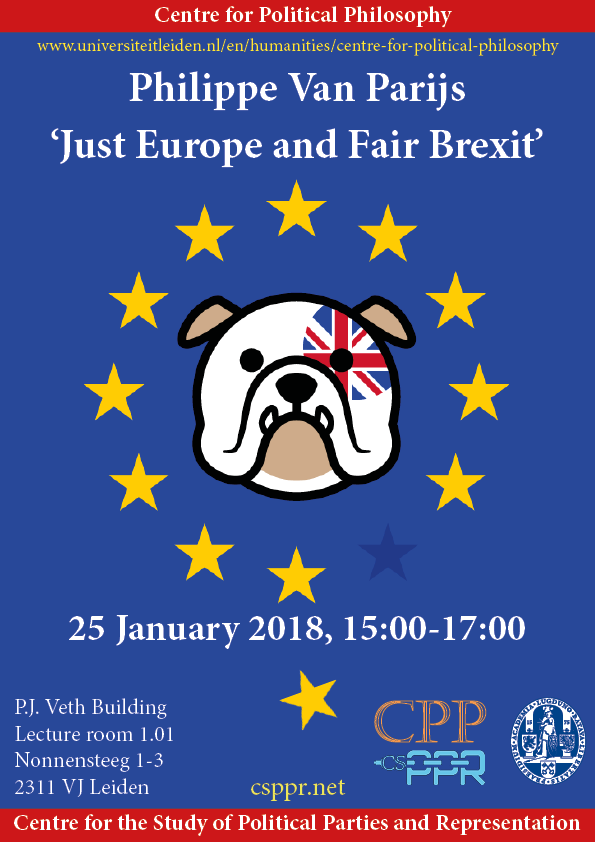