The Institute for Philosophy is pleased to annouce a talk by 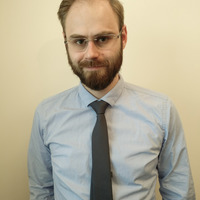 The lecture will discuss the relation between ultimate and conventional truths in Nāgārjuna’s philosophy and in the selection of Mahāyāna sutras that constitute the traditional, if not the historical, context of Nāgārjuna’s Madhyamaka. The analysis of sutras included in thePrajñāpāramitā, Ratnakūṭa and Avataṃsaka collections shows that the ultimate truth is something clearly different from the conventional. This is uncontroversial by itself, however, it possess difficulties for a widespread idea that for Nāgārjuna the two truths are in some philosophically important sense identical (Siderits 1989, Garfield 1995, Garfield and Priest 2003, Arnold 2005).

As will be shown, the identity thesis follows from the Abhidharmic definition of the ultimate truth, while and alternative definition, more characteristics for the Mahāyāna literature, seems to fit Nāgārjuna’s Madhyamaka better. If the alternative definition of the ultimate truth is adopted, the reasoning standing behind the identity thesis fails to prove what it aims to prove, namely, that all there is is conventional.

The lecture will present a possible reinterpretation of Mūlamdhyamkakārikā 24.8-10. According to proposed reinterpretation, the ultimate truth cannot be thought to unenlightened beings otherwise than through the conventional truth, however, two truths are not identical and developed bodhisattvas perceive things as they are independently of any conventions. This interpretation as well as the critique of the identity thesis will be supported by the exposition of two truths in the Mahāyāna sutras.

Szymon Bogacz is a Ph.D. student in the Institute of Philosophy at Jagiellonian University (Kraków, Poland) where he works on early Buddhist philosophy in India and China, theories of argumentation, and ontology. He is an active member of Society for Asian and Comparative Philosophy and International Association of Buddhist Studies. His essay Mūlamadhyamakārikā’s Dedicatory Verse and Pratītyasamutpāda in Early Mahāyāna Sūtras was awarded the first prize in Graduate Essay Contest organized by Society for Asian and Comparative Philosophy in 2016. In years 2013-2015 he was teaching Buddhist philosophy in the Centre for Comparative Studies of Civilisations at the Jagiellonian University