For most people, the Ides of March means the assassination of Julius Caesar.  But surprisingly, in Ovid’s calendar poem the Fasti, the poet highlights the festival of the ancient Roman goddess Anna Perenna and narrates at length the obscure origins of this goddess (3.523-696); Anna is given 174 lines, Caesar’s murder and subsequent deification 14 lines (3.697-710). In an article published in 1996, I argued that Ovid’s treatment of the Anna episode was an example of the carnivalesque, and that Ovid was attempting in the Fasti to rescue from oblivion a popular fertility goddess. The recent discovery of Anna Perenna’s shrine in Rome, with its evidence of an active cult of the goddess through the fourth century, has made me revise my ideas.

In this paper I emphasise that Ovid’s treatment of the Ides of March is a key episode in his critical engagement with both literary and political hierarchies, with his poetic predecessors (especially Vergil, Livy, and possibly Callimachus), and also with the ruling imperial house which, through Augustus’ pontifical control of the Julian calendar, claimed symbolic power over time. In his two main stories of origin for Anna Perenna, Ovid offers irreverent pleasures with his playful rewriting of his august intertexts. But, by making the goddess Anna Perenna originally a mortal, either Dido’s sister from Vergil’s Aeneid or an old woman from Bovillae, the poet also provocatively connects Anna Perenna with one of the major discourses of early imperial rule, deification. The commemoration of Caesar’s murder and apotheosis and of Anna’s festival in this regard converge. While we may not learn from Ovid’s poem much about Anna’s role in Roman religious practice, this goddess acts as a key figure in the Fasti for Ovid’s aims to expand the horizon of cultural memories that Augustus was foreclosing.  With his virtuosic treatment of Anna Perenna on the Ides of March, Ovid boldly mounts a challenge to both temporal and literary authority. 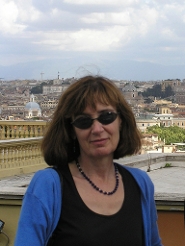 She has published widely in the fields of Augustan, post-Augustan, and Medieval Latin literature and culture. Her main publications include Playing with Time: Ovid's Fasti (Ithaca, NY: Cornell University Press, 1995); Statius' Silvae and the Poetics of Empire (Cambridge: Cambridge University Press, 2002); Statius' Silvae Book 2 (Cambridge Greek and Latin Classics. Cambridge: Cambridge University Press, 2011); Statius: Between Rome and Naples (London: Bristol Classical Press, 2012/2013); Understanding Ovid  (London: I. B. Tauris, 2015). She has also co-edited several volumes, including, recently, the Brill’s Companion to Statius (Leiden: Brill 2014); A Handbook to the Reception of Ovid (Oxford:  Wiley-Blackwell 2015); and Campania in the Literary Imagination (Illinois Classical Studies, 2015).  She is currently at work on a new book project, Scotland and Translation of the Classics, as well as a study of the influence of Catullus upon Flavian writers for the forthcoming Cambridge Companion to Catullus.