Rationality, Alienation, and the Political Enlightenment:  Themes from Gandhi

Rationality, Alienation, and the Political Enlightenment:  Themes from Gandhi 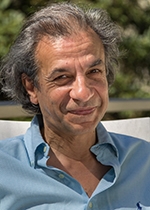 In this lecture, Professor Akeel Bilgrami will explore the chief ideals of the political Enlightenment by asking what underlies the assumption that what happened in Europe must happen everywhere else in the world, including its erstwhile colonies. The themes will range from notions of rationality, alienation, liberty and equality to doctrines and arguments such as the ‘social contract’ and ‘the tragedy of the commons’.

Akeel Bilgrami received a BA in English literature from Elphinstone College, Bombay University, and went to Oxford as a Rhodes Scholar where he read philosophy, politics, and economics. He has a PhD in philosophy from the University of Chicago and is currently the Sidney Morgenbesser Professor of Philosophy at Columbia University, where he is also a professor on the committee on global thought. He was the director of the Humanities Center at Columbia University for seven years and is now the director of its South Asian Institute. His publications include the books Belief and Meaning (1992), Self-Knowledge and Resentment (2006), and Secularism, Identity, and Enchantment (2014). He is due to publish two short books in the near future: What Is a Muslim? and Gandhi’s Integrity. His long-term work is on the relations between agency, value, and practical reason.