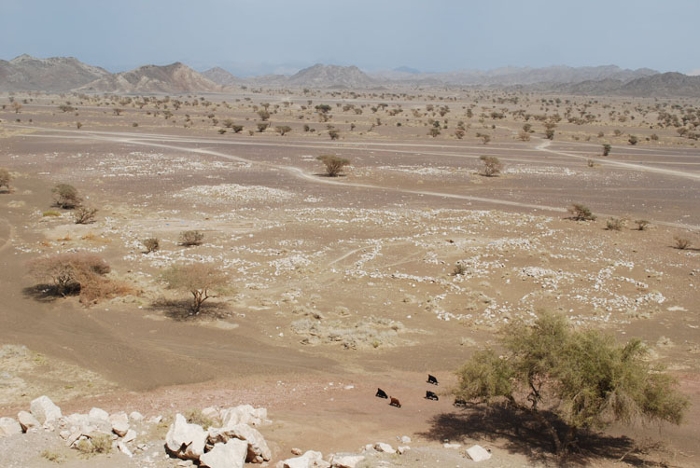 Despite the fact that many tombs from the Umm an-Nar period have been identified and excavated, the current state of research concerning settlements of this period is inconsistent. While a number of settlements are known, the term ‘settlement’ in Eastern Arabian archaeology can refer to different types of site. Usually, it denotes large tower structures made of stone or mudbrick with diameters up to 40 m. Their function is debated; current theories include fortification, refuge, elite residence, cultic building and construction for the supply of water. Whatever their function, the labour that evidently went into their construction marks them out as special, monumental buildings. But what can be said about the simple, ordinary settlements where the majority of the population lived? Those  settlements, also referred to as ‘residential structures’, ‘common houses’ or ‘unfortified settlements’ in order to distinguish them from the towers, are much less studied, although they have the potential to answer many questions about the causes and effects of the social and cultural changes which took place during the Umm an-Nar period.

This two-day meeting aims to provide an opportunity for scholars working on these domestic settlements to share information by comparing data and by debating this topic from different thematic perspectives, including the following: 1. Settlement structure & architecture: Which materials were used in the construction of the houses? Are there differences between the regions (coast/inland)? Are there chronological differences? How is the settlement structured? Are there different functional zones within the settlement? Are there other Umm an-Nar period structures in the vicinity of any given settlement? Are there different types of settlement? Is there a settlement hierarchy? 2. Pottery: What does the pottery of each site looks like? What does it tell us about the chronology of the site, its inter-regional connections, and the functional differences within the settlement? What does it tell us about the differences between these domestic settlements and other Umm an-Nar structures such as tombs and towers? 3. Chronology: What is the chronology of each site? Did the settlement already exist in the preceding Hafit or subsequent Wadi Suq period? When was it abandoned? By which method is it dated (artefact typologies, radiocarbon dates, stratigraphy etc.)? 4. Resources and subsistence: What resources were used in the settlement? Which subsistence strategies did the inhabitants employ? Are there differences between the settlements? Are there specialized settlements? Is the location of a settlement chosen because of available resources? 5. Interregional exchange: Are there indicators of interregional exchange found in the settlements? Do they vary between the settlements? Between which regions did the exchange take place? What was exchanged? Is there an increase/decrease in exchange over time? Do the exchange partners change? 6. Mobility and sedentarism: Was the site settled permanently and year-round or was it a temporary camp site? If the latter, in which parts of the year was it used? What are indicators for seasonal use? Are some types of settlements permanent while others are temporary? If so, which types? And in which regions? 7. Climate: What does the archaeobiological data from the sites tell us about the climate during the Umm an-Nar period? Are there any indicators for change? Was it favourable? Did people struggle?

Conference attendance is free, but please register by sending an email to: s.dopper@arch.leidenuniv.nl