On 20 October 2016 Professor Ruurd Halbertsma will speak about one of the newest acquisitions of the National Museum of Antiquities: the victory cameo of the emperor Constantine. The lecture will be given at the museum, followed by a short visit of the cameo.

In this lecture we will focus on one of the largest imperial cameos in existence: the Gemma Constantiniana in the National Museum of Antiquities in Leiden. The interpretation of the central scene on the cameo has varied over the ages: from the victory of emperor Claudius over the Britons in AD 43 to the festivities of emperor Constantine on the occasion of his victory over Licinius in AD 324. It will be argued that the cameo was a senatorial gift to Constantine during the Decennalia in Rome in the year AD 315-316 and depicts his victory over Maxentius in AD 312. Chronological incongruities and objections by earlier scholars against this date are explained by a closer look at the hairstyles and headgears, which suggest a reworking of the cameo in AD 324. After the lecture we will have the opportunity to see the cameo in situ. 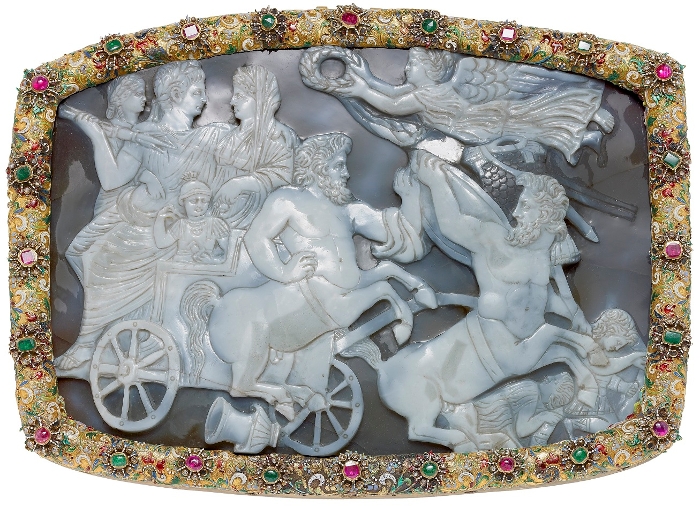 After the lecture we will visit the cameo on site. If you wish to participate in this tour, please purchase a ticket at the museum desk in advance of the lecture. Those in possession of a Museumjaarkaart as well as students of the ancient world and history have free entry.

Ruurd Halbertsma (1958) is curator of the classical department in Leiden’s National Museum of Antiquities  – he was responsible for its recent metamorphosis. He wrote his dissertation on the provenance of the nineteenth-century collections of Punic, Etruscan and Egyptian art in the Netherlands:  Le solitaire des ruines - de archeologische reizen van Jean Emile Humbert (1771-1839) in dienst van het Koninkrijk der Nederlanden (1995). He has published articles and monographies, and lectured at the universities of Kopenhagen and Paris, and also at Yale and Harvard.  His specialisation in the history of museums and collections led to a professorship at the Faculty of Archaeology in Leiden (2010), where he teaches the MA course ‘Museum Studies’. Learn more? Consult one of his more recent articles: