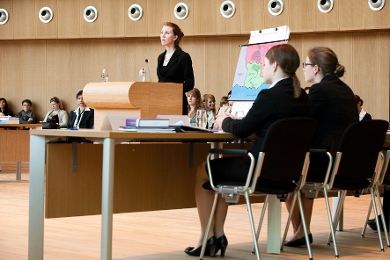 We are pleased to announce that the 39th Edition of the Telders International Law Moot Court Competition will be held from Thursday 19 May until Saturday 21 May 2016.

The Telders International Law Moot Court Competition passed its 30 th milestone in 2007, and is still going strong. Since its humble beginnings in 1977, when only four universities took part, the Competition has today become the most prestigious and important moot court competition in Europe. Annually, teams from over 40 universities compete in the national rounds, with the winning teams going on to represent their countries in the international rounds held at the Grotius Centre and the Peace Palace in The Hague.