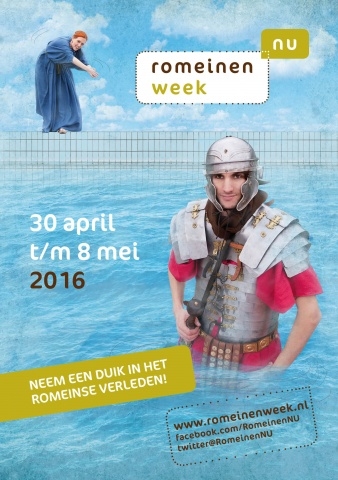 The Romans are back in the Low Countries! On Saturday, the 30th of April, will see the festive opening of the third edition of the Roman Week (30 April until 8 May 2016), in the National Museum of Antiquities in Leiden. A day full of activities for young and old.

The re-enactors of Legio X Gemina will pitch their camp in the main hall of the museum and will answer questions on Roman military life. Lady Aurelia will explain her daily routines as a Roman noble, while a Roman stylist will share the very latest in ancient fashion. And for those who prefer a moment outdoors, a replica of a real Roman coach will make trips through the streets of the city.

Leiden University will be present as well: our colleagues Frits Naerebout, Kim Beerden and Marten Jesse Pot will give lectures (in Dutch) on Roman antiquity.

Visitors can furthermore expect a Roman market, music, a ‘water god workshop’ for kids, games and much more.