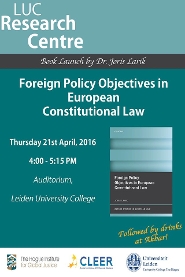 On 21 April 2016 from 16:00-17:15, Leiden University College (LUC), in collaboration with The Hague Institute for Global Justice and the Centre for the Law of EU External Relations (CLEER) at the T.M.C. Asser Institute, will host a book launch and panel discussion for Dr. Joris Larik’s new monograph “Foreign Policy Objectives in European Constitutional Law”, which has just been published by Oxford University Press. The event, which features academics and practitioners to discuss some of the book’s main themes and findings, will take place in the auditorium of Leiden University College The Hague, followed by a drinks reception in the lobby of LUC.

The program of the event will be as follows:

Joris Larik is Assistant Professor of Comparative, European, and International Law at Leiden University College and Senior Researcher at The Hague Institute for Global Justice. Foreign Policy Objectives in European Constitutional Law is based on Larik’s doctoral dissertation, which he defended in June 2013 at the European University Institute in Florence and where it was subsequently awarded the 2014 Mauro Cappelletti Prize for the Best Thesis in Comparative Law.

More information about the book can be found here.

The lecture is free and open to the public.