Perfect Storm or Storm in a Teacup? Britain, Brexit, and the Future of the EU 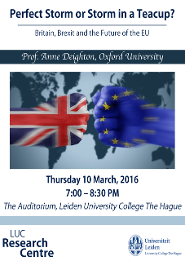 The United Kingdom’s relations with the EU have been problematic for over 50 years. Does the June 2016 referendum on 'Brexit' merely reflect familiar domestic and party political tensions in the UK or is it a sign of a deeper crisis of the EU? And how will the outcome of the referendum shape both the trajectory of UK-EU relations and the future of the EU as a whole?

Anne Deighton is Professor of European International Politics at Oxford University and a Fellow of Wolfson College, Oxford. She specializes in the contemporary history and political integration of Europe and has published widely on EU politics past and present, British foreign policy, Cold War history and European security.

The lecture is free and open to the public!