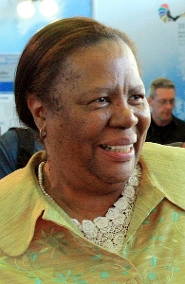 Her excellency Grace Naledi Mandisa Pandor, Minister of Science and Technology of the Republic of South Africa, will give a ceremonial lecture on the occasion of her appointment as honorary visiting Oort Professor of 'Astronomy for Development'.

Science as a tool for development

As a Minister, Naledi Pandor has increased investment in scientific research in South Africa. She is an inspirational and charismatic ambassador of science as a tool for development, particularly in the field of astronomy.

South Africa has made huge strides in astronomy since the end of apartheid. With the construction of large optical (SALT) and radio (MeerKat) telescopes, South Africa is also one of the leaders in developing the Square Kilometer Array, a radio megafacility that will eventually link nine African countries. Naledi Pandor has been a driving force behind these developments nationally and internationally as part of her long-term vision that science can be an important tool in developing the African Continent.

Ms Pandor has spent considerable time and effort convincing members of the European Parliament, the European Commission and the African Union of the importance of astronomy as a tool for development. Her Department led a successful campaign that culminated in a Written Declaration endorsing signed by 393 members of parlianent and a similar resolution in the African Union.

This event is invitation-only. If you wish to attend, please send an e-mail to Caroline de Bruin.