Many Facets of Computation: An Insight in Current Trends

A symposium celebrating the lifetime achievements of Grzegorz Rozenberg on the occasion of his 75th birthday.

The symposium 'Many Facets of Computation: An Insight in Current Trends' is organised by the Leiden Institute of Advanced Computer Science (LIACS), in collaboration with the Institute of Biology Leiden (IBL), the Faculty of Science, and Leiden University.

It takes place in the beautiful Lorentz-zaal of the Kamerlingh Onnes Building in the old city centre of Leiden. The program consists of scientific contributions discussing some current trends in Informatics and Natural Computing. The talks are followed by a reception which provides an opportunity to meet Grzegorz Rozenberg and prominent researchers from LIACS and IBL in an informal setting.

Please send an email to Marloes van der Nat if you plan to attend this meeting and/or the reception.

For more information you may contact one of the organisers, Jetty Kleijn and Marloes van der Nat.

About Grzegorz Rozenberg, the guru of Natural Computing

Grzegorz Rozenberg is a world famous researcher in the areas of Theoretical Computer Science and Natural Computing. He has played a central role in the development of theoretical computer science in Europe and defined the field of Natural Computing, giving it its name and defining its scope - he is often called the guru of Natural Computing. His research interests are broad and often of an interdisciplinary nature. He has published over 500 papers, 6 books, and is a (co-)editor of more than 100 books. He has also served the international computer science community in many different capacities, from memberships of program committees and editorial boards to being a driving force as chair of the steering committee for various  developing new research fields. He was the longest serving President of the European Association for Theoretical Computer Science (EATCS).

For LIACS, Rozenberg is one of its founding fathers. With this symposium LIACS celebrates not only his outstanding scientific achievements, but also acknowledges his crucial contributions towards the establishment of computer science as an independent scientific discipline in Leiden.

Since 1979, Rozenberg has been a full professor at Leiden University. Shortly after his appointment, Leiden University was among the first universities in the Netherlands that created a Computer Science (Informatica) curriculum and a few years later also a Department of Computer Science (the predecessor of the current LIACS). Rozenberg was involved in both and also of paramount importance in their subsequent scientific development. He set up the Theoretical Computer Science research group which became internationally well-known. Furthermore, also at the national level, he played an important role in the emergence of the field of Informatica, for instance as one of the founders of the Dutch Association for Theoretical Computer Science (NVTI, Nederlandse Vereniging voor Theoretische Informatica).

His interest in natural sciences led to investigations of computations as they take place in nature. This gave rise to interdisciplinary cooperations with biologists abroad and at home. Together with colleagues in Leiden, from LIACS and IBL, he founded the Leiden Centre of Natural Computing and was its first director.

After his formal retirement in 2012, he is still very active as a researcher and involved in numerous interdisciplinary and international collaborations. He frequently travels with lectures to share his knowledge and innovative insights.

Celebrating the age of 75 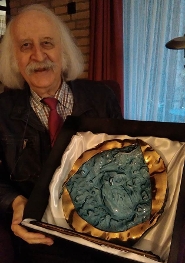 This year, Rozenberg has reached the age of 75.  To celebrate this occasion, the University of Turku, the Swedish Åbo Akademi in Turku, and the well-known conference 'Computability in Europe' organised the international symposium 'Magic in Science' which took place in June 2017 in Turku, Finland. The name of the symposium was inspired by the fact that Rozenberg is also a performing magician (furthermore, he is an expert in the paintings of Hieronymus Bosch). The scientific program of the symposium covered a broad range of topics, reflecting Rozenberg's research interests. Also an impressive Liber Amicorum was published on this occasion.

Like 'Magic in Science', also FACETS celebrates the 75th birthday of Rozenberg. In particular, it acknowledges the tremendous role that he has played in the development of Computer Science in Leiden and in the Netherlands. Discussing various exciting facets of computation, its program illustrates the enormous progress that Informatica has made since the pioneering years of Grzegorz Rozenberg.